skip to main | skip to sidebar

After months of playing shows, recording, tour, and all sorts of stuff we finally have a chance to write some new material and we're looking to debut it within the next couple of weeks. We're working on 2 songs at the moment that we're hoping to record possibly next year and make ourselves a new EP! There's no lyrics for one of the songs but the other's concept is about a child being born with multiple personalities and as this child grows up these personalities that were mentors to him fade away causing him to lose his sanity so in reality he needs these personalities to survive. It's sounding really fucking intense and we can't fucking wait to unleash it. We're hoping to record a new EP in the spring. Shits costs money and that is something we absolutely don't have at the moment but that's what makes a band known as "struggling musicians". We got some real big plans for next year. Our plan is to call our new EP "If Only Minds Could Paint Pictures", release it, and send it off to labels of course. Who knows, maybe we'll just send the demo off now and maybe a full length would be even more possible. I think that's about all for now.
Also buy tickets off us for this show! 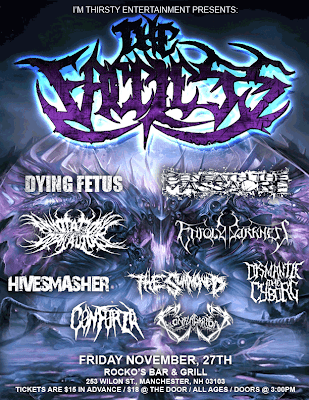 Posted by The Summoned at 9:43 PM No comments:

A few updates as of late

We've been keeping real busy as of late. We have a shit ton of shows coming up, finished a new demo, new sponsor, and planing our summer tour! Here's the scoop.

We have a ton of shows coming up. Tuesday June 2nd we'll be playing with Waking The Cadaver at Club Hell in Providence, RI. It's going to be a fucking brutal ass show. Who gives a shit if it's on a Tuesday, definitely a show you shouldn't miss. We're also selling tickets for that show for only $10.00

We have a ton of other shows but one in particular is really special to us. The Summer Slaughter Battle of the Bands in Manchester, NH on June 19th. We're playing a battle of the bands that will help us achieve our dream of playing the Palladium in Worcester with a huge influence of our Necrophagist! We'll be selling tickets for $15.00 which is kind of steep with know but not only do you get to see a sweet battle of the bands, we're going to include a ton of goodies when you buy a ticket from us. You will receive 1 ticket to the battle of the bands with a summer slaughter poster, a summer slaughter booklet, our debut EP "Harvest" and if they're back in time our brand new demo! How can you deny that? The EP alone is worth $7.00! Please make our dreams come true and help us win this battle!

We just finished recording a new demo with our go-to-guy Fred Sladkey of Mudskipper Studio. We recorded 3 new songs titled "Dreaming in 2D", "Anatomy of a Bar Fight", and "Voids". This demo sounds incredible and all we heard was the rough unmixed version. Fred is mixing the drums as we speak and should be done shortly! We're really pumped about this demo and feel it's our best recording to date.

We would like to introduce our newest sponsor Bleeding Tears Clothing. They got some bad ass clothes for sale that you'll be seeing us rep very shortly!

Tour I'm sad to say is moving along very slowly. We've been having some troubles booking in certain states but that wont stop us from achieving what we want! We'll keep plugging away at it and hopefully you'll see us up and down the east coast in late July / early August! If you think you can help us out with a show here are some of the dates we're looking for.

That's about all for now. We'll keep you posted :)
Posted by The Summoned at 11:45 AM No comments:

And take a guess as to what happens?

- Shaun's head basically blows up and needs to be shipped back to Madison Amps
- Shaun's cab blows three speakers so instead of a 4x12 it's currently a 1x12
- Jake's head keeps fucking up.

So this is what has happened in the past few days. Luckily things are starting to look up. Jake got the preamps in his head retubed so now it sounds waaaay better than ever. Shaun got a used Marshall 1960A 4x12 cabinet which if you're experience with guitar cabs you know it's a great sounding one! Now the main problem, we shipped Shaun's head off to Colorado via UPS. It took 3 days to get there which means if we want to use his head for recording Madison needs to fix it and ship it out by Tuesday May 12th. If we get it back in time it will be a miracle. Regardless we're still going to record this demo either with or without the Madison, we'll just need to make do is all. We all can't wait to record the new demo and we feel people are really going to like it. We like to think the three songs we're recording sound unique but relevant to each other at the same time no to mention fucking cool as hell. Be on the lookout for those demos. They'll be done sooner than you think :)
Posted by The Summoned at 4:56 PM No comments:

This is our main one 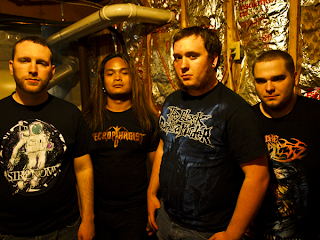 And this is our funny one :) 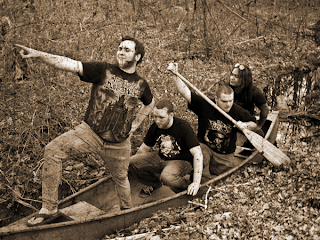 Posted by The Summoned at 9:53 PM No comments:

You know what would be cool...opening for The Acacia Strain!

Help!!! Buy some of our merch on our bigcartel store so we can get some new merch, a trailer hitch, and a new demo recorded before tour. We're not one to beg or anything but every little amount helps us achieve our goals. Eventually we want to get a new van and a trailer so we can begin touring the US! Then we can eventually buy a jet, have XZibit pimp it out and then we can fly and play for our friends over seas!!! Hahaha naa just kidding on the jet part. But we definitely could use your help.

Also if you want you can now buy our debut EP "Harvest" on iTunes and CD Baby. Hey every little bit counts right? :)

-Steve
Posted by The Summoned at 10:21 AM No comments:

The Summoned On The Web